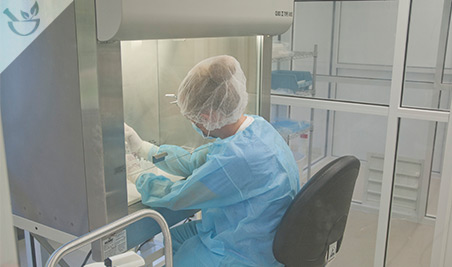 Sterile compounding represents the most critical aspects of pharmaceutical compounding.
Examples of products that need to be prepared in a sterile environment include:

Proper ingredients, technique, supplies, and facilities are needed to ensure the patient receives correct medication in a safe manner. Central Compounding Center in Durham does this by the following methods:

PCAB Accreditation – among the first 50 pharmacies in the United States to receive this distinction, Central Compounding Center South submitted itself to rigorous testing against standards created by leading experts in the field of compounding (find more information at http://achc.org/pcab). As part of PCAB accreditation our facility must meet standards set forth in the United States Pharmacopeia Chapter <797>, considered the most stringent set of guidelines regarding sterile compounding.

Central Compounding Center South in Durham, North Carolina is proud to provide the highest quality sterile compounding for our human and veterinary patients.

The content and photographs on this website are copyrighted or licensed material and may not be downloaded for other than personal use.
Retransmission, republication, reproduction or any other use of the content or photographs is prohibited.
A prescription from a licensed practitioner is required for compounded medications.